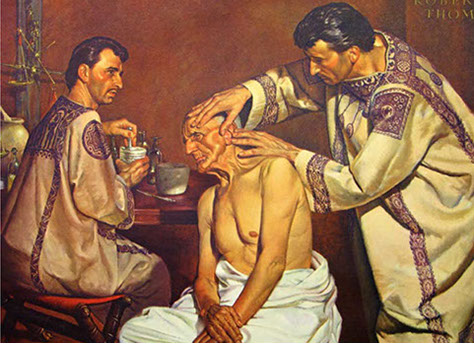 As Saints, they are called Holy “Unmercenaries,” a term used for physicians who refused payment for their services, insisting that it was Christ, not they, who healed the patients.

Cosmas and Damian healing a patient.

The Faculty of Medicine and Surgery traditionally celebrates Medicine Week on the last week of September in honor of its patron saints, Cosmas and Damian, whose feast day falls on September 26. The twin physicians, who were martyred in the 3rd century AD, were born in Arabia and were eminent practitioners of the art of healing in the city of Aegea, which was part of the Roman province of modern day Syria. While some texts describe Damian as an apothecary and Cosmas as the physician, healing was frequently ascribed to both brothers. They were revered as the “anargyroi” (the silverless or penniless ones), famous for their refusal to accept anything in return for healing the sick. Stories tell of one brother refusing to speak to the other for having accepted an apple in exchange for their service. As Saints, they are called Holy “Unmercenaries”, a term used for physicians who refused payment for their services, insisti ng that it was Christ, not they, who healed the patients. In death, they are believed to continue healing those who call on them in faith. For their kindness and their generosity to those in need, the brothers became instruments of conversion to Christ.

During the Roman persecution instituted by Diocletian, their eminence caused them to be among the fi rst to be arrested and ordered to recant their faith. They refused, even after enduring torture and crucifixion, and were ordered beheaded c. 287 AD. By the 4th century, numerous churches were dedicated to the twin saints in Jerusalem, in Egypt and Mesopotamia. The converted Roman emperor Justinian brought their relics and built a church dedicated to them in Constantinople in gratitude for his healing due to their intercession. In Rome, the Bibliotheca Pacis was rededicated as the Basilica of Santi Cosme e Damiano in their honor by Pope Felix IV and remains standing to this day. The twin physicians are considered as the patron saints of physicians, surgeons and pharmacists.

The UST Faculty of Medicine and Surgery affirms her task in the development and formation of competent, compassionate, and committed Thomasian physicians in the delivery of health care services of global standards and in accord with the needs of the nation.

Copyright © 2020 UST Faculty of Medicine and Surgery. All Rights Reserved.